Our Gear Editor, Chris Townsend, learns the ropes of rescues in high places with Assynt Mountain Rescue and Helly Hansen on Stac Pollaidh.

Outdoor company press trips can vary from exciting to mundane, depending on how much time is spent in the hills and how much on indoor product promotions and factory visits. This one for Helly Hansen definitely fell into the exciting category, and was also interesting and informative as it wasn’t just about gear or, indeed, even mainly about gear. Instead “the aim was to raise awareness of the incredible work the Mountain Rescue Teams do across the UK to keep everyone else safe in the mountains and enjoying the outdoors.” To that end, myself and other outdoor writers were invited to spend a day in the NW Highlands with members of Assynt Mountain Rescue, one of five mountain rescue teams sponsored by Helly Hansen, and learn a bit about their work.

We met the Assynt Mountain Rescue team at the foot of Stac Pollaidh, only a little hill (it’s just 612 metres high) but bristling with dramatic pinnacles and crags along its long narrow ridge. Here we discovered we were to carry a stretcher up the mountain and quickly learned just how tiring this is as we all – writers, mountain rescuers, and members of Helly Hansen’s PR team – took turns.

Even on a reasonably smooth path, it was hard work. Once the terrain became steeper and stonier it was much more difficult keeping your footing and trying to keep the stretcher level. Luckily there was nobody in it as it did lurch occasionally. It was still quite heavy as it was full of mountain rescue equipment. 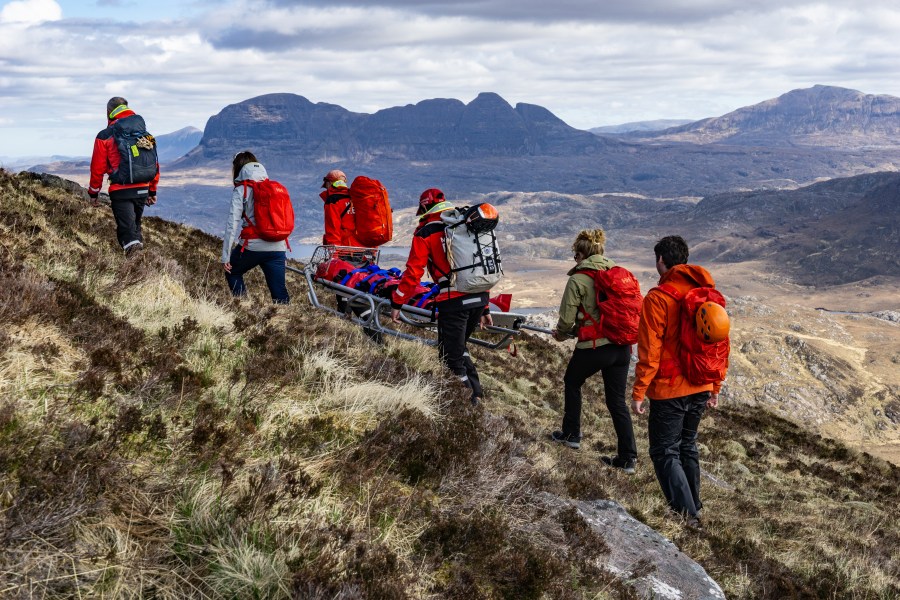 The weather was just about perfect, with high clouds, bursts of sunshine, and an occasional cool breeze. The latter meant the Helly Hansen jackets provided were needed at times. It wasn’t t-shirt weather. The air was clear and the views spectacular with Suilven, Cul Mor, and Cul Beag standing out above the lochan-spattered lower ground.

Once on the ridge, the mountain rescuers decided we should practise taking the stretcher up steep rocky terrain with someone in it. Firstly, a volunteer was strapped in and the casualty bag inflated around them so they were really secure then we learned how to move the stretcher up a rocky gully hand over hand, a slow but efficient method that meant you were only holding the stretcher when your feet were secure and stationary. Each time the stretcher had moved up along the four pairs of us holding it the rear pair would move to the front and the exercise was repeated.

A volunteer in the stretcher.
Credit: Ed Smith, supplied by Helly Hansen

Once we reached the top of the gully we then reversed the process and took the stretcher back down. It was hard work. There was a top rope so the stretcher couldn’t go anywhere if we proved incompetent. Because the terrain was rocky with many loose stones care had to be taken not to knock any down when moving from the back to the front of the stretcher. Even with eight people holding the stretcher it felt heavy and the process was tiring.

The next demonstration was fascinating as the mountain rescuers deployed their drone and showed us how valuable it could be. Tim Hamlet, the team leader and a mountain guide (Hamlet Mountaineering), disappeared round a corner to hide in a gully. The drone was then used to scan the hillside. In infra-red mode, it quickly picked up the heat from Tim’s body so he showed up clearly. Using the drone like this, rescuers could scan a hillside riven with gullies quickly with no risk to themselves.

Without the drone, they would have to rope down each gully, which would take a long time and could be dangerous. We were also shown and were able to try a Virtual Reality headset, which gave a much bigger and clearer image of the view the drone had than the small screen on the drone control panel. It was also somewhat unnerving to use! When the drone raced away from the ridge so the people on it shrank into the distance I really felt as though I was being projected out into the air beyond the mountain.

This is how to organise a press trip! The weather helped too. The Helly Hansen clothing didn’t get much of a test but I have since reviewed the good-looking Odin 1 World Infinity waterproof jacket in much more severe conditions and found that it performs well. I’ve also tested the Transistor pack we used and liked that too.

Helly Hansen is also working with mountain rescue teams to “build a connection between the end-user and Helly Hansen’s professionals” by way of a website called Trail Finder which has recommended trails from Mountain Rescuers both in the UK and around the world plus advice on gear and techniques.

Read more: Are jet packs the future of mountain rescue? 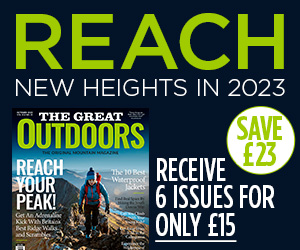 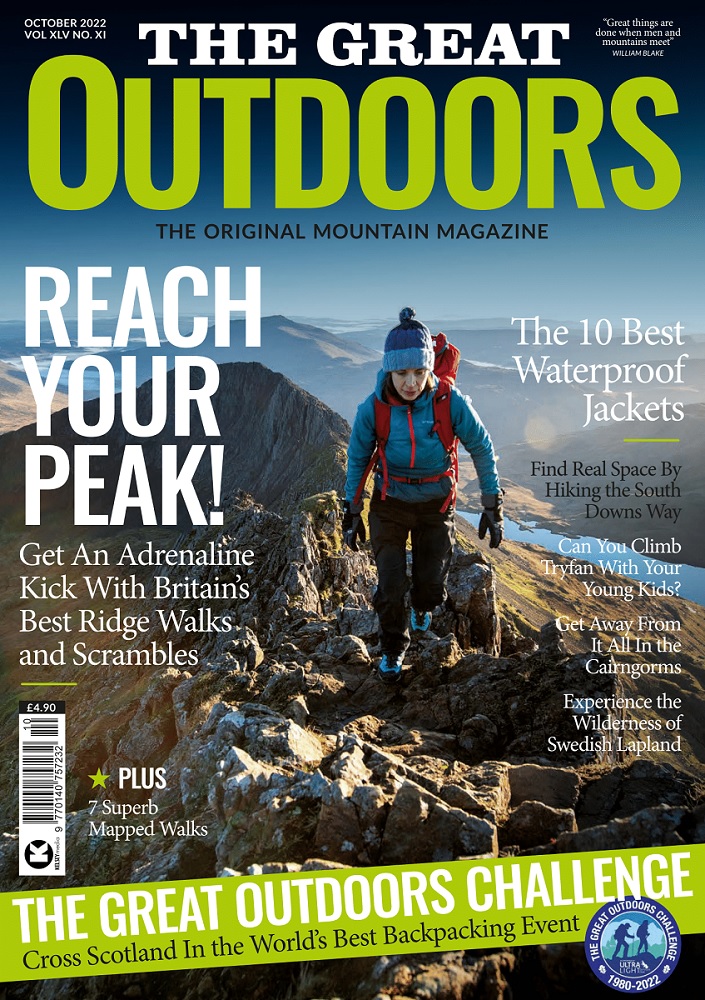